Through time, Ancient civilizations have been claimed by a variety of natural ocurrences such as Volcanoes, Earthquakes, Desert Sandstorms. Even a couple might have been buried under water, such as the famed coastal city of Atlantis.

When Mount Vesuvius erupted in A.D.79 the cities of Pompeii and Herculaneum were completely covered by ash, stones, and mud to a depth of about 12Ft (4m).

Excavations to uncover the cities began in the 18th century and are still going on. Unlike the objects found in most excavations, those at Pompeii and Herculaneum are usually in good condition. 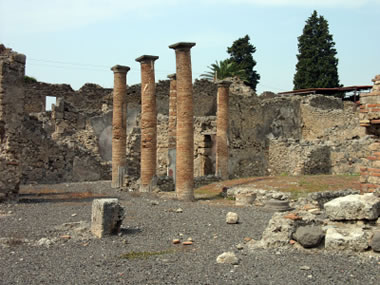 Even the graffiti, or scribblings on the walls, can still be read;
“Successus the cloth-weaver loves Iris, the innkeeper’s slave,”
or
“I am surprised, O wall, that you have not fallen down with the weight of all this scribbled rubbish”..

Of course, Vesuvius has erupted with quite interesting activities a couple of times since 79 A.D. This photo below shows the 1944 eruption that gave the city of Naples something to remember.